IoT is tying together both machines and people. Communication will undoubtedly be completed 10 times more quickly over a 5G embedded module than it is currently possible. Devices, Connectivity, Data Processing, and the UI comprise the IoT's four main building blocks. The IoT ecosystem is advancing technologically quickly. In fact, the connected device has essentially become the network, and in the coming years, the number of connected devices will soar dramatically. The rapid rollout of 5G WIFI, which will significantly impact how people live, work, and play around the world, is one of many factors causing this growth.

Here are some of the benefits that 5G WIFI will offer for industrial IoT applications:

It is expected that throughput or network speed will increase with every upgrade in communication standards. Despite being in its infancy, 5G is already about ten times faster than 4G. Also, as it is further adopted and rolled out by the major ISPs, expectations are that speeds will approach 10Gps. This speed improvement will revolutionize how Industrial IoT applications are developed and run, improving performance for systems already using cellular connections. The faster data transmission times of 5G WIFI to and from the cloud, as well as the simplicity and flexibility they offer to multi-vendor systems, are expected to push cellular connectivity to the top of system integrators' connectivity priorities.

Industrial IoT and Industry 4.0 are poised to quickly benefit from these advancements, especially in applications requiring close to real-time feedback, with initial 5G latency expectations set at around one millisecond, roughly fifty times more responsive than 4G. Another area that could profit from 5G cellular connectivity's lower latency is augmented reality (AR).

A brand-new feature of 5G WIFI is network slicing, which divides the network into self-contained and independently secured zones. Essentially, your device will assign a specific level of network capabilities based on the service to which it is subscribed. Network administrators of 5G Industrial IoT systems can redistribute bandwidth from non-critical systems to more data-intensive areas of the network by controlling speed and latency between zones.

As the 5G WIFI network expands, this increase in data transmitted per watt will be essential in reducing carbon emissions due to the ongoing pressure on factories to cut their carbon footprint and increase energy efficiency. Furthermore, this decrease in power consumption will make it possible to deploy a large number of low-powered endpoints using 5G's potential support for NB-IoT, enabling M2M in a variety of new applications.

Where To Get The Best 5G embedded module

In areas where 4G LTE was previously an impractical choice for industrial IoT applications, 5G embedded modules' high security, high-speed, low latency communication and increased provisioning position them as a competitive option. Thus, we at Fibocom launched new Wi-Fi 6 wireless module, W600, to deliver significantly improved wireless throughput, connection density, coverage, latency, and availability for all IoT scenarios by combining it with Fibocom 5G module FG150. Our W600 Wi-Fi 6 module is based on the Qualcomm QCA6391 platform and complies with IEEE standard 802.11.a/b/g/n/ax, integrates with WLAN/BT processor and supports data communication between Fibocom FG150 5G module through PCIe interface. Visit our site today to get more information about our latest technologies. 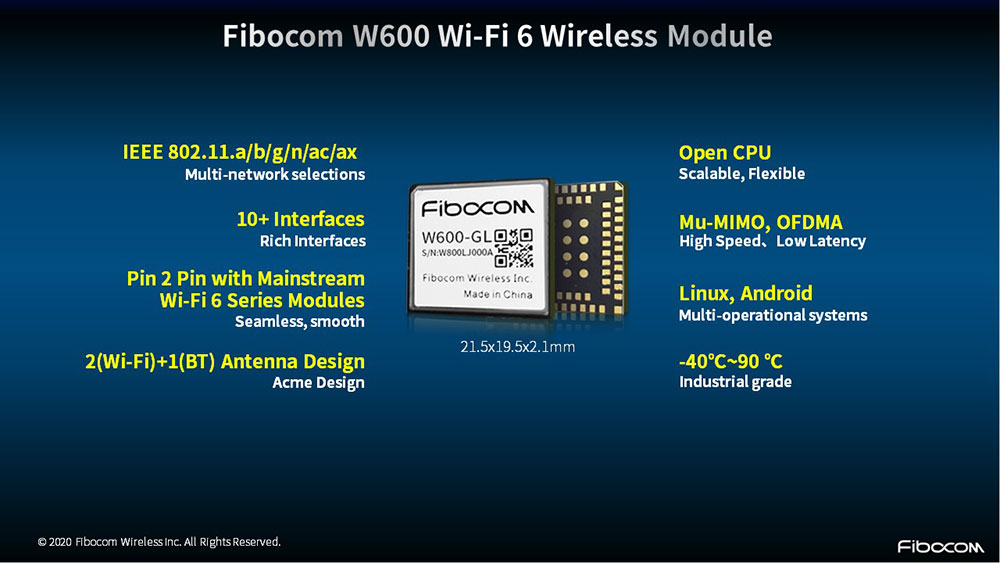 Wi-Fi 6, also known as 802.11.ax, builds on the technology legacies of earlier Wi-Fi generations to maintain compatibility with older wireless devices at 2.4 GHz. Simultaneously, it provides increased capacity and enhanced data rates within the 5-GHz channels of newer Wi-Fi generations. Whether its called IEEE 802.11 or Wi-Fi, wireless networks have become an increasingly important part of many lives worldwide, whether in fixed environments such as homes or factories or in large public domains like convention centers, museums, or even in a sporting stadium. Demand for increased capacity and throughput speeds grows as users add more wireless devices to each network and expect faster response times as they download large files or even stream their favorite video programming. 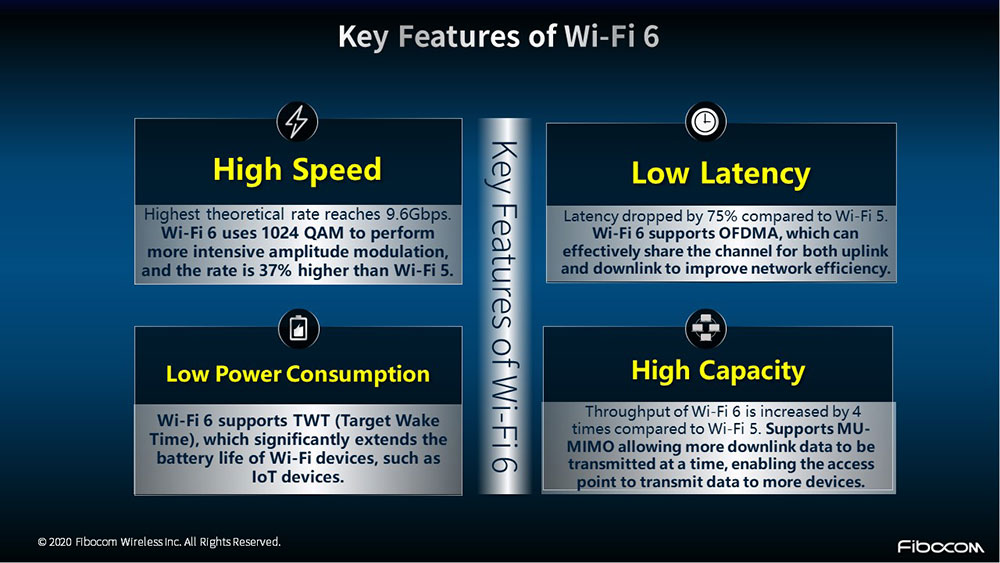 Low latency: Wi-Fi 6 supports OFDMA technology, which can effectively share channels for both uplink and downlink to improve network efficiency and reduce latency.

High Capacity: Wi-Fi 6 supports MU-MIMO, allowing more downlink data to be transmitted at a time, allowing the access point to transmit data to more devices at the same time.

Indoor/Outdoor CPE: The deployment of 5G base stations has not been fully rolled out yet, and the coverage of the 5G network in private areas is not very good. Outdoor CPE embedded with Wi-Fi 6 +5G modules can enhance network signals and achieves good coverage indoor. Indoor CPE, embedded with Wi-Fi 6 module, can meet access of more terminals, and guarantee each terminal's high-speed and low-latency experience, For example, in case of indoor cloud game, the Wi-Fi 6 enabled FWA devices can meet the indoor multi-screen interactive requirements of ultra-high definition broadband videos. 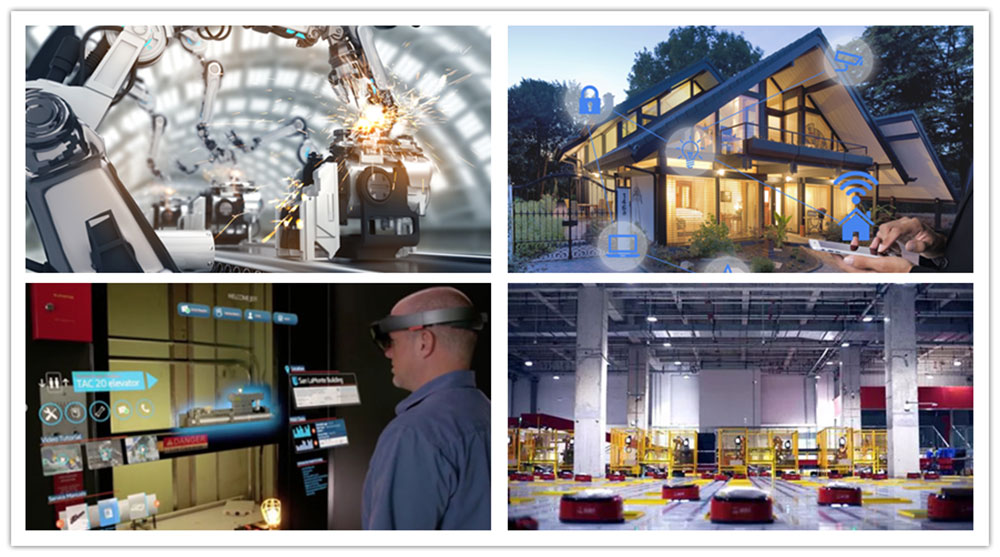 Currently, Fibocom W600 Wi-Fi module is in the stage of engineering sample and will be ready for mass production in September this year.