Shenzhen China – July 14, 2021 - Fibocom(Stock Code: 300638), a global leading provider of cellular embedded wireless module solutions for the Internet of Things (IoT), announced the world-wide launch of LTE Cat 1 Module MC116. Supporting Windows, Linux and Android operating systems as well as GNSS, the Fibocom MC116 is a high-performance LTECat 1 module with a rich extension of interfaces, which is perfectly suitablefor a variety of IoT applications such as telematics, smart payments, public security, asset tracking and so on. 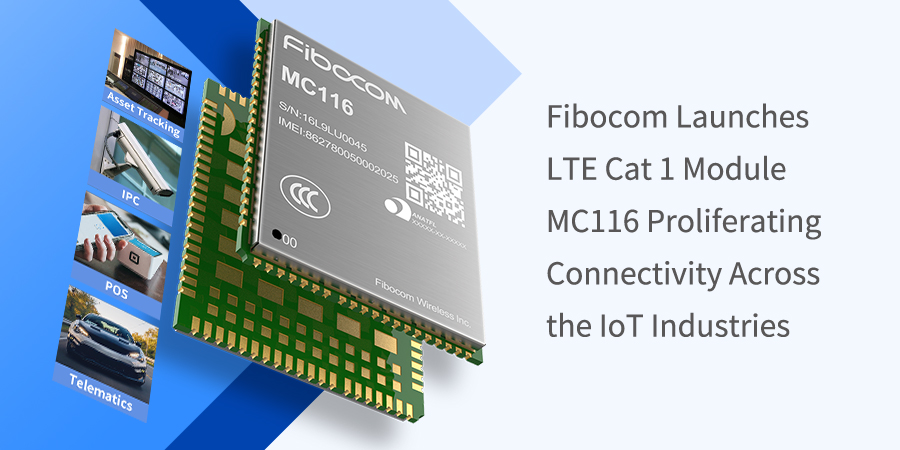 Based on Qualcomm platform, the newly-launched MC116 module adopts LCC+LGA form factor and is pin-to-pin compatible with the Fibocom LTE Cat 4 module NL668. Fibocom’s MC116 module supports LTE FDD frequency bands, with a theoretical downlink peaking at 10 Mbps and an uplink of 5 Mbps. Additionally, the Fibocom MC116-EUL module is backward compatible with WCDMA/ GSM frequency bands, which helps to reduce the complexity of deployment.

Fibocom’s MC116 module is available in two regional versions, MC116-NA and MC116-EUL, proliferating connectivity for the IoT market in Europe, Latin America and North America. The module supports Windows, Linux and Android operating systems, as well as GNSS, including GPS, GLONASS, Beidou and Galileo. With a rich extension of interfaces including SIM 1.8V/3.0V, USB2.0, UART, I2C etc., the LTE Cat 1 module MC116 can be widely applied in IoT scenarios such as telematics, smart payments, public security, asset tracking and so on.

The IoT product manager of Fibocom said, “We are glad to introduce the new MC116 module for our global customers, which is an excellent addition to our LTE Cat 1 wireless module family. I believe Fibocom’s leading LTE Cat 1 modules will help to unlock new business opportunities in the IoT sector with reliable connectivity and robust security.”